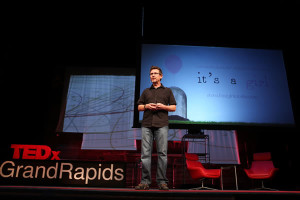 It’s a Girl film director Evan Grae Davis was recently invited to speak at TEDxGrandRapids, engaging an audience of 750 leaders, influencers and innovators from the West-Michigan area on May 9th, 2013.

When Evan was asked what he would be speaking about, this is what he had in mind:

“I had previously been privileged to speak at TEDxGateway in Mumbai, India, where I laid out the foundational issues underlying gendercide. This time, I wanted to address the questions that have repeatedly come up as I speak at screenings and events related to It’s a Girl and the campaign to end gendercide in India and China.

“In this talk at TEDxGrandRapids, I explore the questions: What is culture? Is it always a-moral? Does the world community have any moral responsibility to act in the face of human rights violations that result from diverse cultural traditions? I also share some of my own personal story and journey.”