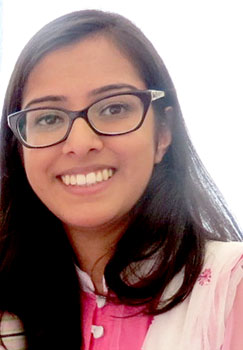 Sarpreet is a third year student at McMaster University (Hamilton, Ontario) and is studying Health Sciences. She began a club last year called United Against Gendercide with the hope of creating awareness and inspiring students to unite in the fight against gender discrimination.

United Against Gendercide‘s first event was a screening of It’s a Girl at McMaster University, where they had the opportunity to effectively outline the objective of the club to McMaster students. “The first step towards creating change is raising awareness and educating individuals and we truly felt this film provided us with exactly that opportunity.” -Sarpreet Kahlon

My community is not restricted to my neighbourhood and it is not bound by the borders of my country, I am a part of a global community.

As a part of this global community I believe gendercide is one of humanity’s greatest challenges. The acts of foeticide and infanticide continue to take away basic human rights from girls. UNICEF estimates that 5 million female fetuses are aborted every year in India, and 1 out of 4 girls born in India will not survive past puberty.

While some mothers fight for their daughters, others blinded by cultural preferences choose to strangle, burn and bury their daughters. Governments are failing to provide adequate protection. China’s one-child policy continues to promote the killing of girls and promotional posters continue to remind the Indian population that spending 500 rupees on an abortion is better than having to spend 5000 rupees for dowry. In India, the ratio of girls to boys is 914 to 1000. In China the sex ratio stands at 119.45 boys for every 100 girls.

Every year in India approximately 600,000 girls are killed. This shortage has the possibility of promoting a vicious cycle in which girls will be sold, bought and abducted. I believe the struggles each girl faces as she fights to live and the consequences that the increasing disappearance of girls will and is presenting is the greatest challenge we as a global community are faced with.

Under the Indian civil law and Sections 304B and 498A of the Indian Penal Code, dowry in India has been banned since 1961.

However, even today the headlines of Indian newspapers reveal that daughter-in-laws are blackmailed, tortured and brutally murdered because her parents are unable to fulfil the demands of her in-laws. We need to question why this is still happening, why when a daughter is born in a developing country marriage and dowry are the first set of words that go through her parents’ minds. We also need to question why child marriage continues to deprive young girls of their childhood. The International Center for Research on Women (ICRW) explains that the greatest reduction in poverty rates were seen when the female labour force grew the fastest. The Council on Foreign Relations predicts that a country’s GDP on average increases by 3%, when 10% more of its girls are educated, and on average $1 in the hands’ of a woman is worth $10 in the hands’ of a man. Women are key contributors to our economy.

However, their efforts often are unnoticed and undervalued. Economically empowering girls and women will not only allow us as a community to progress towards gender equality but it will also provide the opportunity for economic growth. Females have the potential and capacity to bring about economic change, however they are deprived of the skills and resources that are necessary in order to enable them to bring about this change. To economically engage and empower girls and women we must invest in them. We must equip them with the skills and knowledge that will allow them to accelerate in all fields.

Of the 163 million illiterate youth in the world, 63% of them are females. In addition to knowing this, we are also aware that girls who have one more year of education than the national average earn 10% to 20% more. We also know that when female farmers have the same level of education and resources as male farmers, crop yields in Kenya rise by 22%. Therefore, if we are aware of the economical benefits of educating girls we should take steps as a global community to empower girls and unite to fight against gendercide and gender discrimination.