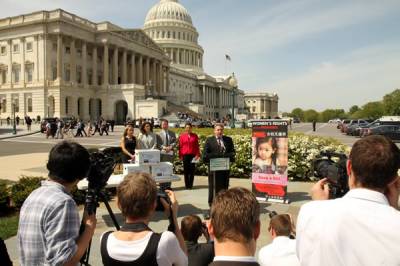 In the wake of the Capitol screening of It’s A Girl Tuesday evening, Wednesday, Congressman Chris Smith joined with Reggie Littlejohn, president of Women’s Rights Without Frontiers, and other members of the Coalition Against Gendercide at the Capitol to highlight the more than two hundred thousand petitions signed by people around the world, through the Causes platform, demanding that China end forced abortion and sterilization under the One Child Policy, and take action against gendercide.

Smith, Littlejohn and the Director of It’s a Girl – Evan Grae Davis – then attempted to deliver the petitions to the Chinese Embassy in Washington, but the embassy staff refused to open the doors to accept them. 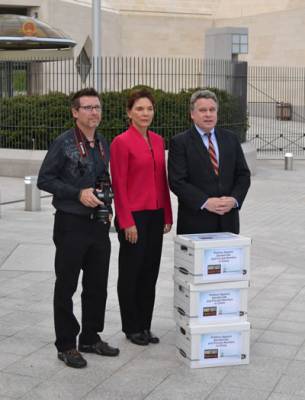 “The press were staging cameras in front of the embassy before we arrived, so clearly the Embassy staff had plenty of notice that something was coming their way,” said Davis of the attempted delivery. “Congressmen Smith and Reggie Littlejohn were neither permitted entry nor did anyone answer the pages through the intercom system at the door, though we could see movement behind the glass windows. All attempts were met with silence. At one point, an individual who appeared to work for the embassy  approached the doors and also tried to get into the embassy, but they quickly ran off once it was clear the doors would not be opened as long as we were present. It’s clear to me the embassy had heard we would be delivering the petitions and rather than hear the voices of hundreds of thousands of people around the world, they chose to lock their doors and prevent even a member of the U.S. Congress from being heard.”

We are committed to delivering the petitions and making your voices heard, so please continue to sign this petition so when the time comes, even more signatures will be delivered. We will not allow China to shut its door on the millions of women and girls impacted by gendercide and forced abortion! 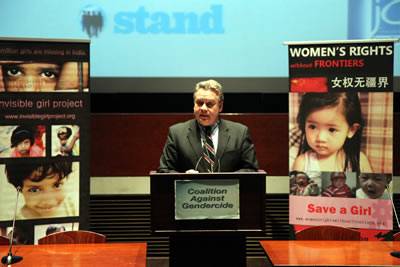 Congressmen Chris Smith (R-NJ), Jim Moran (D-VA), and Mark Meadows (R-NC) joined with the nonpartisan Coalition Against Gendercide to host a special screening of It’s A Girl in the Capitol building in Washington D.C., in conjunction with the Tom Lantos Commission on Human Rights. The members of Congress were joined by congressional staff, NGO leaders and members of the media for this groundbreaking event.

Gendercide “is a crime against women, a gender crime that has no parallel or precedent in all of human history,” said Congressman Smith, who chairs the House International Relations Africa, Global Human Rights and International Operations Subcommittee and Co-Chairs the Congressional-Executive Commission on China. “This film will awaken many to these atrocities and will hopefully call forth men and women of goodwill in every country of the world.”

“In the early years of this country slavery was excused by many as… a cultural thing. It wasn’t cultural, it was wrong. Similarly [gendercide] is not cultural, this is criminal,” added Congressman Moran, a senior Democrat on the powerful House Appropriations Committee. “The extent to which we stand by on the sidelines and don’t do anything about it makes us culpable as well. Today, what this country and this world needs to be about is ending gendercide because it is…inexcusable.”

Gendercide “has led to horrifying increases in human trafficking, sexual slavery and gang rapes,” said Congressman Meadows, a member of the House Foreign Affairs Committee, pointing to the recent headlines and international outrage about the rape and torture of a 5-year old girl in New Delhi. “We talk about wanting to find more common ground in Washington DC. And this is an issue where Democrats and Republicans can absolutely agree. Gendercide must be stopped.”

“The statistics are staggering in India. The Indian Crime Records Bureau reports that the rapes of children, which can ultimately of course lead to death, have increased 336% in India in the past 10 years,” noted Jill McElya, Vice President of the Invisible Girl Project, a partner in the Coalition Against Gendercide active in India. The recent New Delhi horror, on the heels of the gang rape of a 23-year old woman that raised national and international outrage a few months ago “illustrates the problem that is going on in India. The laws are there to protect women but the laws must be enforced. Corruption must be stopped. People must be taught that girls are every bit as valuable because they are human beings.”

“This is truly an issue about which the left and right can agree. No one supports forced

abortion because it’s not a choice,” said Reggie Littlejohn, President of Women’s Rights Without Frontiers, a partner in the Coalition Against Gendercide active in helping women in China. “Together, China and India comprise one third of the world’s population. That one third of the world’s women are deprived of the right to bear girls is the biggest women’s rights issue on earth.”

“Gendercide cannot be lumped into simply an issue about abortion. It’s broader than that. This is about violence against women, discrimination against women and it really is an area of tremendous common ground,” said Andrew Brown, the producer of It’s A Girl. “That is something we are committed to as filmmakers as we screen this film around the world, at the British Parliament, the European Parliament, the United Nations Commission on the Status of Women, and here in Washington this week. We call on the leaders here in the U.S. and those around the world to take meaningful action against this extreme injustice.” 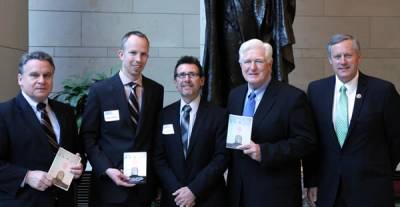