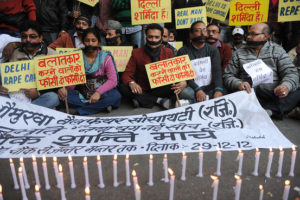 As India grieves the death of the young medical student who was brutally gang raped on a moving bus December 16th, 2012, a historic movement continues to develop demanding justice and action from the government. But leaders and legislators have come across as indifferent, unresponsive and out of touch with the reality of violence against women as thousands turn out to demonstrate and march in the streets of Delhi. “The incident has raised the issue of declining public confidence in the law and order machinery in the city,” a National Human Rights Commission statement said. “Especially, in its capacity to ensure safety of women as a number of such incidents have been reported in the national capital in the recent past.”

Groping and sexual harassment of women is often referred to as “eve-teasing” and is attributed to the natural response of men to the behavior of women.