Posted on December 22, 2017 by Reggie Littlejohn

The Congressional Executive Commission on China has released its 2017 Report, which contains documentation of continued forced abortion under China’s Two-Child Policy.   In addition, the sex ratio at birth reported by the Chinese government indicates that the selective abortion of baby girls continues under the new policy.

Reggie Littlejohn, founder and president of Women’s Rights Without Frontiers, stated, “When the Chinese communist government announced that they were instituting a Two Child Policy, the news media proclaimed that China had “abandoned” or “scrapped” the One-Child Policy.  As I testified at a Congressional Hearing at the time, this is demonstrably false.  Under the Two-Child Policy, single women are still forcibly aborted, as are third children.   The 2017 Report from the Congressional Executive Commission on China sadly confirms my predictions.”

Specifically, the “Population Control” section of the Report confirms that the Two-Child Policy regulations “include provisions that require couples to be married to have children and limit them to bearing two children.”   Coercive population control remains at the center of the new regulations:  “Officials continue to enforce compliance with population planning targets using methods including heavy fines, job termination, arbitrary detention, and coerced abortion.”   These coercive measures violate various international treaties to which China is a signatory.  CECC Report, p. 1

China told the world about its “decision to abandon” the One Child Policy on January 1, 2016 – implying that it has ended all coercive birth control.   Meanwhile “some provincial-level population planning regulations continued to explicitly instruct officials to carry out abortions, often referred to as ‘remedial measures’ (bujiu cuoshi) for ‘out-of-plan’ [illegal] pregnancies.”  Moreover, at least eight provinces have promoted harsh measures against women with illegal pregnancies, using such phrases as “fight the family planning work battle,” and “use all means necessary.”  CECC Report, pp. 3-4.

Moreover, China’s National Health and Family Planning Commission (NHFPC) repeatedly emphasized that the “social compensation fees” for illegal pregancies will not be abolished, including fines for those who give birth to third children.  Report, p. 6.  These fees can be ten times the average annual income for people in that locality.  Report, p. 5.

For those who cannot pay such a large fine on an emergency basis to maintain an illegal pregnancy, what alternative will there be other than forced abortion?

The Two-Child Policy was instituted because the Chinese government saw that it was heading into a dual demographic disaster.  First, China has a steeply rising elderly population, coupled with a dwindling labor force unable to support it.  According to the government-controlled People’s Daily, by 2050, the elderly population in China will reach 483 million or one-third of China’s total population.  Report, p. 8.

Second, the selective abortion of girls has continued.   According to a National Bureau of Statistics Report cited by the CECC, the sex ratio at birth in 2015 was 113.5 males born for every 100 females born.  Such a skewed ratio could only be achieved through sex-selective abortion.  Meanwhile, there are an estimated 33 to 37 million more males living in China than females – a dangerous imbalance that is driving  sex trafficking and sexual slavery from multiple nations into China “for forced marriage or commercial sexual exploitation.”  Report pp. 8-9.

Meanwhile, the Two-Child Policy has yielded disappointing results, providing more than 1.5 million fewer births annually than expected.  China’s birthrate remains “dangerously low,” 1.5 children per woman in 2015, well below replacement level of 2.1.  Many people simply do not want to have a second child, in large part because it is very expensive.

China’s Two-Child Policy continues the human rights abuses and gender-based violence of the One-Child Policy,” stated Littlejohn.  “Even with the Two-Child Policy, China remains firmly on the path to demographic disaster.  China’s population problem is not that it has too many people.  It’s that it has too few young people and too few women.  China is in desperate need of babies.  They should be offering incentives for couples to have babies, not forcibly aborting “illegal” pregnancies.  Under these circumstances, there is absolutely no excuse to continue any program of coercive population control whatsoever.  We call for the immediate, complete abandonment of all coercive population control in China.”

Learn about our “Save a Girl” Campaign in China. 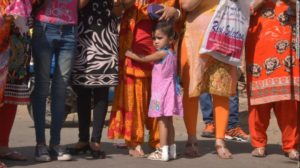 A pregnant woman sat in a hospital consultation room in the western Indian state of Maharashtra. She wanted to know the sex of her baby, she told the doctor.

In many countries, this would be a routine process, all part of becoming a new parent. But in India — where thousands of female fetuses are aborted every year — revealing the sex of an unborn child has been illegal since 1994.

Nevertheless, the doctor offered to tell the woman the sex of her baby for a one-off payment of 12,500 rupees ($190). She agreed and paid for the service, documenting everything on a hidden spy camera.
Last week, a court in Malegaon convicted the doctor and his brother of running a sex-selection clinic and abortion racket. They face three years in jail and a fine, according to police.

The sting, which caught them was set up by Maharashtra-based activist Varsha Deshpande, founder of Lek Ladki Abhiyan, an organization dedicated to fighting sex-selective abortions. The woman was a pregnant volunteer recruited by Deshpande.

Since 2004, Deshpande said, they have carried out dozens of investigations, which have resulted in 20 convictions.

“This gender gap has resulted in villages where men have no women to marry, because the women are non-existent,” said Invisible Girl Project CEO Jill McElya.

While most activists rely on awareness raising and pressuring the government, Deshpande has always favored direct action. In the early days, before she received any donations or outside help, she used cheap Walkmans to record audio for evidence.

Concerned tipsters can now call a hotline to share information about a doctor offering sex-selection tests. Members of Deshpande’s team then go along with a pregnant volunteer to collect evidence on how the doctor or nurse is breaking the law.

Unless the government steps up enforcement of the law, Deshpande said she believes this is the only way to stop the abortions.

“There’s a deterrent effect,” she said.
The Ministry of Health and Family Welfare did not respond to a request for comment.

India first banned sex-selection in 1994. However, activists said that the law left many loopholes, and Deshpande worked with many others to bring about further reform in 2002, which made the legislation more stringent.

Almost 15 years later however, Deshpande, who sits on a national committee created by that legislation, said the “political will” to actually enforce the regulations does not exist.

The law requires practitioners using ultrasound technology to register with the government. It also prohibits companies from selling ultrasound machines to those not registered and requires local officials to educate the public against sex-selection.

“Until the judicial system works like it should and the courts uphold the law, there will be no true systemic change,” McElya said.

Deshpande agrees. “If we start implementing it, then we can stop it within one year,” she said.

‘My grandfather didn’t kill his daughters’

Preference for sons over daughters in India, as with other Asian countries, comes from a cultural belief that daughters are economic burdens and sons are not. Cultural practices such as requiring a bride provide a dowry reinforce this.

“They would see a daughter as a liability. A daughter means you have to spend. Sons are called blank checks,” said Vibhuti Patel, a professor at Mumbai’s Shreemati Nathibai Damodar Thackersey Women’s University.

“(In-laws) know they’re going to get easy money from dowry.”

Patel grew up in a Gujarati family where she heard stories of uncles choosing to kill unborn females.

“My grandfather was the only person who did not kill his daughters,” she said. And by that logic, “he was supposed to be poor.”

The practice is not limited to poor families however. Patel said that sex-selective abortions carried out at a clinic are expensive, and are primarily found among the upper classes, who want to keep their property and assets within the family.

For now, the fight continues, Patel said: “If there’s a demand, they will provide a supply.”

We are thankful for your support in helping us fight to end gendercide in India.
Gratefully,

There are an estimated 200 million ‘missing’ women in the world today. Although a large percentage of these cases occur in Southeast Asia, namely in China and India, son preference is not uncommon in Europe and is a growing problem in the U.S., where a number of reports attest that, yes, Americans too have aborted thousands of babies simply because they are girls.

Abortions based on gender are currently legal in the U.S., eventhough 86% of Americans are opposed to the practice according to a 2006 Zogby International Poll.